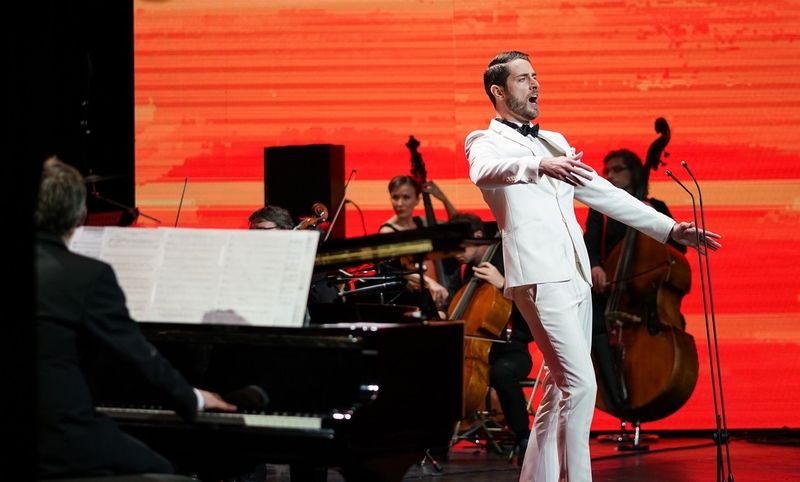 After the lively revival of Les P'tites Michu with Les Brigands at the Opéra de Tours at the end of 2019, the baritone Romain Dayez is giving place to contemporary music at the beginning of 2020. A flexible and singular lyric artist, he is currently on the bill of Les Bains Macabres, a contemporary comic opera by Guillaume Connesson. He plays Mathéo, a passionate and morbid character, who will also appear on the stage of the Victoires de la Musique Classique on the next 21st, February.

Romain will then perform in Helsinki in a revival of Kaija Saariaho's La Passion de Simone with La Chambre aux échos, then will be Ulysses at the Opéra de Rennes and in Quimper in L'Odyssée de Jules Matton. He will also be part of the production of Gounod's Roméo et Juliette at the Opéra National de Bordeaux.

"Romain Dayez has the sense of perfect timing that makes great comedians, the naturalness of singing and the emotion that is there when you call her. With that, a body like Fred Astaire, supple as a cat, all in length." Hélène Delavault

"A man and an artist who is cultivated, curious, eclectic and endearing, with impressive vocal possibilities. An artist we haven't finished talking about! " - Musiq3

The artistic career of the baritone Romain Dayez reflects his character, marked by insatiable curiosity. From a very young age, he came into contact with many artistic currents, and before turning definitively towards lyrical singing, he played several instruments, and was initiated into theatre and the plastic arts.

His open-mindedness allows him to approach a wide range of genres: medieval and baroque music, cabaret, operetta, contemporary opera and even electro music. He sings under the baton of conductors such as Marc Minkowski, Pierre Dumoussaud, Arie Van Beek or Paul Daniel, is invited to many early music festivals (La Chaise-Dieu, Sablé, Ambronay, Namur, Bremen...), and collaborates with many companies such as Les Frivolités Parisiennes, Les Brigands, or the centre of the Palazzetto Bru Zane. He has sung in places as diverse as the Philharmonie de Paris, many opera houses (Palais Garnier, the operas of Bordeaux, Nantes, Montpellier, Metz...), the Théâtre du Châtelet or the Folies Bergères. He is artist in residence at the Théâtre Impérial de Compiègne. In the contemporary repertoire, he has worked with composers such as Kaija Saariaho, Philippe Boesmans, Graciane Finzi, John Rutter, or Guillaume Connesson.

He is featured in Connesson's first comic opera, Les Bains Macabres, a Les Frivolités Parisiennes coproduction, premiered on January 24th in Compiègne, then performed at the Théâtre de l'Athénée until February 6, 2020. A modern work in the old-fashioned way, conducted with finesse, humour and perfumed with a few drops of phantasmagoria.

Romain will also be invited to the Victoires de la Musique Classique on 21 February in Metz, broadcast live on France 3, where he will perform a duet from this opera.

In addition to his future operatic engagements (Opéra de Bordeaux, Opéra Royal de Wallonie, Théâtre Impérial, Opéra de Massy, Philharmonie de Paris...), next season he will devote himself to a new project based on early 20th century French songs. Conceived with his accomplice pianist and arranger Cyril Lehn, "Le Flagrant des Lits" offers a humorous incursion into the repertoire of Ray Ventura, Dranem, or even Jean Gabin and Charles Trenet.