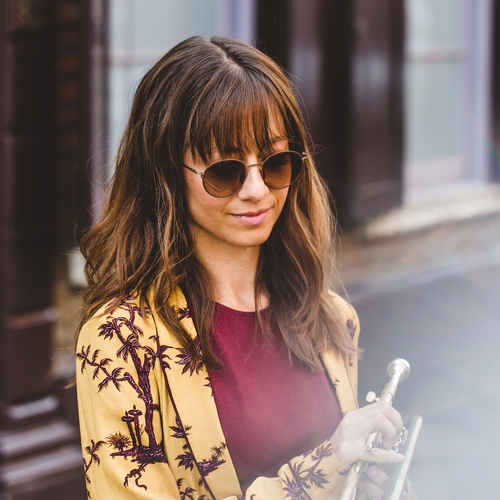 Yazz Ahmed is a British-Bahraini trumpet player and composer who seeks to blur the lines between jazz, electronic sound design, bringing together the sounds of her mixed heritage. Her music has been described as ‘psychedelic Arabic jazz, intoxicating and compelling’.

In recent years she has led her various ensembles in concerts around the UK and abroad, including performances in New York, Toronto, Kuwait, Algiers, Berlin, Köln, Paris, Istanbul, Tunis and Amsterdam, and at major festivals such as WOMAD, Molde Jazz, Pori Jazz and Love Supreme.

In 2012, Yazz represented Bahrain in London’s Cultural Olympiad, joining renowned musicians from the Arabian Gulf in collaboration with Transglobal Underground. This project, In Transit, was supported by the British Council and was performed in Dubai and London.

Yazz was awarded a jazz fellowship from Birmingham Jazzlines in 2014, who supported her during the course of a year in writing a major new suite, Alhaan al Siduri, premiered in October 2015 at the CBSO Centre, Birmingham. One year later the second performance marked Yazz’s debut in her paternal homeland at the Bahrain International Music Festival.

In 2015, Tomorrow’s Warriors commissioned Yazz, with support from PRS Women Make Music, to write a suite inspired by courageous and influential women. Polyhymnia was premiered at the Purcell Room by a special all-female ensemble at the WOW! Festival in March 2015.

During her year as an LSO Soundhub composer in 2016, Yazz explored writing music for her newly developed quarter-tone flugelhorn, a unique instrument which enables her to get closer to the spiritual nature of the ‘blue notes’ in Arabic music.

2017 saw the release of her second album, La Saboteuse, on Naim Records. The album made a global impact, gaining multiple rave reviews and making many ‘best of 2017’ lists around the world, including Jazz Album of the Year in The Wire magazine and achieving the number 18 spot in Bandcamp’s top 100 albums (all genres). “..this is enchanting, late night music that floats on the liminal space between dreams and reality. And for sheer, unconquered beauty, there are few albums of any genre that reach these heady heights. Ahmed, in diving deep within herself, comes back up for air with a mysterious, wondrous artifact humming in her hands,” the2010s.net

In August 2018 Yazz released an EP of remixes from La Saboteuse, featuring collaborations with Hector Plimmer, DJ Khalab and Blacksea Não Maya, which has brought her music to a new audience.

Alongside seven other composers, Yazz was commissioned by the Ligeti Quartet, to write music inspired by modern astronomy, each focusing on a different planet in the solar system. The Planets 2018, created especially for planetariums, features Yazz’s composition Saturn and was performed around the UK during October 2018.

Continuing her explorations into space, Yazz was later commissioned by the Open University to write a solo piece inspired by the moon, which was performed at the OU Moon Night in December 2018.

In June 2019, Yazz revealed the coda to La Saboteuse: A Shoal Of Souls. Composed as a reaction to Sophie Bass’s striking artwork for La Saboteuse, the piece is dedicated to the thousands of lives lost by those attempting to cross the Mediterranean Sea in search of a better future.

Yazz’s 2019 album, Polyhymnia, (Ropeadope Records) was voted Album of The Year at the 2020 Jazz FM Awards. Making many ‘best of year’ lists and garnering multiple rave reviews, the release builds on her growing reputation as a notable composer with a strong individual voice, a figure at the heart of the exciting UK scene. Evolving from a performance on International Women’s Day in 2015, the music takes the form of a suite written in celebration of courageous and inspiring women and features an extended ensemble of 25 musicians. The passion and power of this music speaks for itself but understanding the message behind the compositions adds depth and resonance for the listener, taking the experience to another level.

The striking album artwork was also picked up by Apple and has been highlighted in their recent iPhone and watch advertising campaigns.

More recently, Yazz has been composing music for Adult Swim, the Festival of New Trumpet Music – New York, and performing ‘isolated sessions’ for the Boiler Room and a vinyl set for the Vinyl Factory.

In November 2020 Yazz announced her second remix EP, Polyhymnia Remixed. Teaming up with fast-rising underground producers, DJ Plead, Asmara and Surly, the record expands on the themes of Polyhymnia, expressing the important stories of the women it celebrates, told by other voices, with a fresh perspective.

Yazz has been nominated for Downbeat Magazine’s ‘Trumpet Artist of The Year’ and featured in the ‘Rising Star Trumpet’ category in the 2020 Downbeat critics’ poll. And at the close of 2020, she won the Jazz FM Award for UK Jazz Act of the Year, Jazz FM Album of The Year, and the highly prestigious Ivor Novello Award for Innovation.

“I hope that through my music I can bring people together, building bridges between cultures, and changing perceptions about women in jazz and people of Muslim heritage”