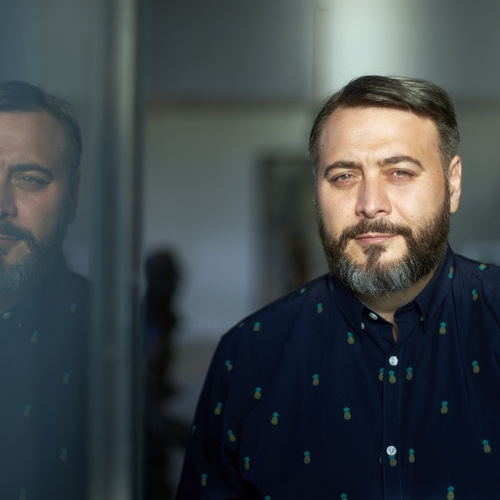 Eric Legnini was born in Belgium, on February 20th, 1970. He passed a childhood immersed in Bach and Puccini. In the beginning of the 1980s, the discovery of an Erroll Garner album revealed an entirely new musical horizon, especially when it came to keyboards. With his exceptional ear for music, he tinkered with these strange harmonies seized on the fly and quickly fell under the spell of jazz—Eric had found his means of expression.

He remained in New York for two years—time enough to take the pulse of the cosmopolis. He also discovered another interest : rap, and such artists as Public Enemy and Ice-T— Legnini’s other great passion. He also managed to pick up a few courses at Long Island University with Richie Beirach, but above all he was getting “on-the-job training,” spending his nights in epic jam sessions in the company of the finest flower of the young jazz musicians of the period (Vincent Herring, Ravi Coltrane, Branford Marsalis, Kenny Garrett…). Through the medium of Kenny Kirkland’s voluble and precise style, Legnini began to appreciate the seminal importance of Herbie Hancock in the history of piano jazz, and from then on he became a devotee of that free hard bop that is a standard of the modern Blue Note esthetic of the 1960’s.

At the end of 1993, it’s the jump into the great beyond : Di Battista and his orchestra head out to conquer Paris. Their seductive, resolute hard bop, combined with passion, talent and the obvious pleasure they derived from playing made them an instant sensation within a few months of their arrival. A first album with Label Bleu, Volare, in 1997, released to universal critical acclaim, confirmed their standing as “the new group to watch.”

Appreciated in the studio for his musicality and know-how, Legnini also began working as an artistic director on a number of variety albums, a highly refined work which gave concrete expression to both his love of vocals and black music (soul, hip hop).

At the age of 35, Legnini, in the midst of his stylistic maturity, finally decided to step out of the shadows and signed his first record as a leader on a French label, "Miss Soul". The opportunity to reveal to the greatest number of people a rich, seductive and perfectly original personal musical universe in its way of multiplying the connections between tradition and modernity, learned art and popular expression.

In 2008, he completed with Trippin', the last part of the triptych (Miss Soul, Big Boogaloo) which established him as one of the masters of the art of the French trio.

In 2013, he signed the album Sing Twice! Since then, he continues his work as a composer, album producer (Kellylee Evans,...), plays in all-star groups such as the quartet with Manu Katché, Richard Bona and Stefano di Battista; he also creates at Jazz à la Villette in September 2014 a program around the mythical album of Ray Charles "What'd I say", directs the project "Jazz at the Philharmonic" in February 2015 with a group of 10 musicians including Joe Lovano, Jeff Ballard, Ambrose Akinmusire, Stefano di Battista...

2015 is a year in which he continues to multiply his projects: touring with the project "What'd I say", recording for the Impulse! label of the album "Red & Black Light" with Ibrahim Maalouf.

His last two albums, Waxx Up and Six Strings Under, a demonstration of the musician's talent, have been hailed by the critics!