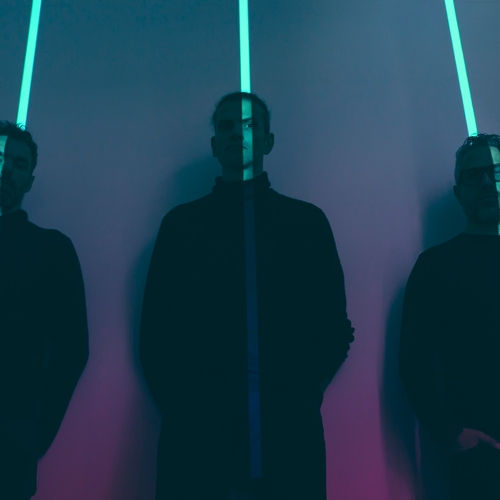 After many collaborations in duo (with Émile Parisien, Michel Portal, Michael Wollny, François Salque) or within his quintet, Living Being, Vincent Peirani wanted to embark on another form of orchestration, that of the trio.

With the Italian guitarist Federico Casagrande, who has been living in Paris for many years, and Ziv Ravitz, an Israeli drummer who lives in New York, he forms a hybrid trio, guitar, drums, accordion, in which each musician can take the place of another, to become, by turns, a soloist, a rhythmist, a colourist, and so on.

This cosmopolitan formula explores all kinds of music: enigmatic, oneiric, electronic, explosive, colourful, even silent. Everything is permitted and left to the free will of each of the three protagonists.

Like the Joker – not so much the fictional super-villain of American comic books as the playing card found in most card decks – all three of them have an equal and at the same time complementary role, and they are sometimes in opposition, unpredictable… Contradiction then adds to the trio’s soundscape, enriching it even further and affirming its originality.

Like all popular music, jazz is associated with strong personalities. International recognition of accordionist Vincent Peirani rests on that essential, fundamental quality. His musical charisma, his very distinctive creative skills, his unique approach to his art – all of which are the fruit of a very open, unblinkered attitude – strike the listener immediately.

After brilliant studies in classical music (many international awards), his dive into the world of jazz received the seal of success from the start and was crowned at the Victoires du Jazz in 2014 (“Revelation”) and 2015 (“Artist of the Year”). Vincent Peirani has the ability to turn everything he touches into gold: in jazz, of course (his own projects, but also collaborations with Daniel Humair, Michel Portal, and others), but also in chanson (Sanseverino, Les Yeux Noirs), film music (composer for Mathieu Almaric’s Barbara in 2017), and so on. Whatever the style, the public follows: in his performances, he creates a balance between the relatively straightforward (inventive revivals of well-known themes) and a blessed unexpectedness, with art music and popular music very close to each other, a sign of great artistry.

The man who, ten years ago, completely renewed the language of the accordion (and continues to do so) has become a major artist, whose uninhibited, cosmopolitan view of music and sense of instrumental combination and colour, enable him to bring that rare and precious magical touch to everything he does.

Abrazo. Embrace. Sometimes that of one’s dance partner, sometimes a fraternal hug. Can there be a better image for the duo composed of accordionist Vincent Peirani and soprano saxophonist Emile Parisien?
“It’s like a marriage,” says Peirani, “with ups and downs, but what could be more normal? But right now, we really want to play together.” There are probably few musicians who know each other as well as Peirani and Parisien. They have given over a thousand concerts together in the past ten years, more than six hundred of them as a duo.

“Abrazo” is not inspired by the work of a composer but by an art form, a culture: tango, its elegance, its melancholy and the power of its rhythms and melodies. As on their first duo recording, Peirani and Parisien do not play the material of the originals, but they play around with it.

There is something here that is completely magical. It appears that the ingredients for this hypnotic potion could come from anywhere: traditional or modern jazz, free avant-garde, classical, folk, rock, electronic, music new or old – the thirst for novelty, the desire for adventure seem insatiable. It is that boundless curiosity, that desire to grow together and climb to ever new heights that bind together the duo Peirani & Parisien and make it so unique.