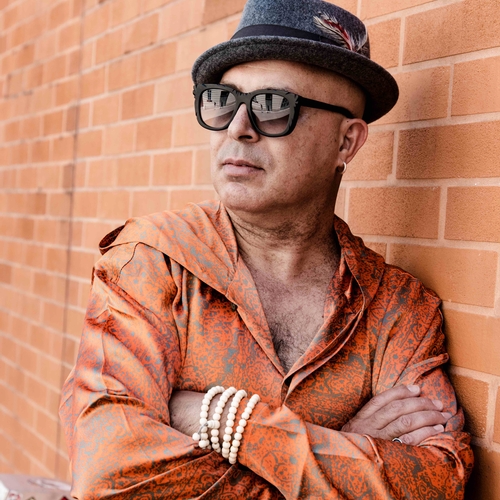 Dhafer Youssef is at the vanguard of a movement in contemporary music that bridges the gap between Eastern and Western influences. Considered the most inventive oud player today, over the course of his two and a half decade career Dhafer has released nine studio albums showcasing his musicianship and ability to transcend genres among jazz, electronic, and world fusion.

His impressive catalog of critically acclaimed releases has earned him the 2006 BBC Award for World Music and 2017 Edison Award, media praise from publications such as The Guardian, The Times, The Evening Standard, Downbeat Magazine, and Jazzwise among others, and a spot on the United Nations Educational, Scientific, and Culture Organization’s 2015 All-Star Global Concert. He has also found success in the world of musical scores working with the legendary Ridley Scott (Exodus: Gods and Kings), James Horner (The Amazing Spider-Man, Day of the Falcon / Black Gold) and Dave McKean (Luna).

“The topic of the album is first and foremost about traveling,” shares Dhafer. “After traveling to the four  corners of the world, in search of new sounds, here I sing differently and use vocal effects that I grew up  with. Particularly the sound effect of megaphones for the call to prayer - hence the record title, Street of  Minarets.”

He continues, “this record is a journey through time with a bridge sitting between the child I was, a music lover and admirer of the great masters like Miles, Herbie, and Dave, and the grown-up individual I have become. A bridge between the jazz of the 50s and its rockier version of the 80s too. I wanted to show that I am a musician in perpetual motion, avoiding being labeled as kitsch or exotic.”

Approaching the album in an opposite direction as he usually does, Dhafer first invited the guests he wanted on the songs — which include Herbie Hancock (piano), Marcus Miller (bass), Nguyên Lê (guitar), Rakesh Chaurasia (flute), Adriano Dos Santos Tenori (percussion), Dave Holland (double bass), Vinnie Colaiuta (drums) and Ambrose Akinmusire (trumpet) — and then composed the music with them in mind. Marking Dhafer’s tenth studio album, Street of Minarets was originally recorded at the historic Sunset Studio in Los Angeles with flute and percussion recorded in Paris. The 12-track LP was mixed at Nguyên’s home studio in Lyon, France under the supervision of Steve Argüelles and mastered in Göteborg, Sweden.

Written from the fifty-something Dhafer of today to his teenage-self, the album offers a gift for the dreamers, the lovers, the fighters, and the obscure. Although the composition of his previous 2018 release Sounds of Mirrors was quite obvious for him as he combined his unique musical touch with Indian music, Street of Minarets required 5 years of questioning and hard work. What was once an unfinished project that Dhafer felt was missing the soul his music usually has, overcoming obstacles of intense anxiety in addition to vocal surgery during the pandemic would go on to rekindle his eternal love of music and provide him with the motivation he needed to rewrite and rearrange the record. The result is a relatable journey of sufferings and successes ultimately spotlighting Dhafer’s inspiring resilience.