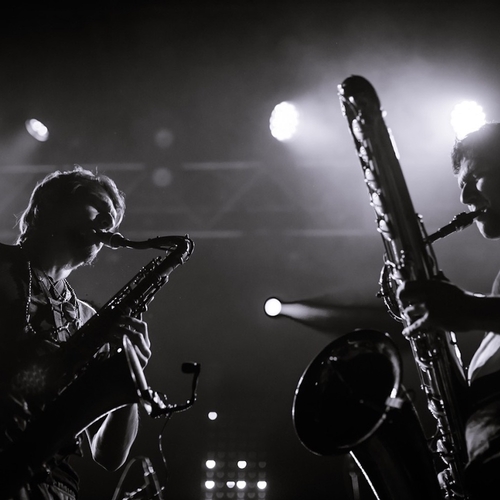 “I‘m realizing more and more every day that you can make anything happen for yourself if you really want to,” says Moon Hooch horn player Mike Wilbur. “You can change your existence by just going out and doing it, by taking simple actions every day.”

If any band is a poster child for turning the power of positive thoughts and intentions into reality, it’s the explosive horn-and-percussion trio Moon Hooch. In just a few short years, the group— Wilbur, fellow horn player Wenzl McGowen, and drummer James Muschler—has gone from playing on New York City subway platforms to touring with the likes of Beats Antique, They Might Be Giants, and Lotus, as well as selling out their own headline shows in major venues around the country. On ‘Red Sky,’ their third and most adventurous full-length album to date, the band uses everything they’ve learned from their whirlwind journey to push their sound to new heights, bringing together the raw, transcendent energy of their live performances and the sleek sophistication of their studio work into a singular, intoxicating brew that blends elements of virtuosic jazz, groovy funk, and pulse-pounding electronic dance music.

“I think ‘Red Sky’ is more focused than any of our past albums,” reflects McGowen. “We practice meditation and yoga, and I think that we’re more evolved as people than we’ve ever been right now. That evolution expresses itself as focus, and through focus comes our energy.” The album followed their 2013 eponymous debut, which had Relix swooning for their “deep bass lines, catchy melodies and pounding rhythms,” while the Wall Street Journal celebrated their “electronic house music mixed with brawny saxophone riff," and their 2014 release ‘This Is Cave Music,’ an exhilarating thrill ride that earned rave reviews from critics and fans alike. NPR hailed it as “unhinged” and “irresistible,” praising each musician’s “remarkable abilities” and naming their Tiny Desk Concert one of the best in the prestigious series’ history.

Though the band—whose members initially met as students at the New School—turned heads in the music industry as relative unknowns with a charismatic, unconventional sound (they play with unique tonguing techniques and utilize found objects like traffic cones attached to the bells of their horns to manipulate tone, for instance), they were already a familiar and beloved sight to strangers in New York, who would react with such joy and fervor to their impromptu subway platform sets that the NYPD had to ban them from locations that couldn’t handle the crowds. NY Mag once referred to their sound as “Jay Gatsby on ecstasy,” while the NY Post fell for their “catchy melodic hooks and funky rhythms,” saying they had “the power to make you secretly wish that the short [subway] wait becomes an indefinite delay.”